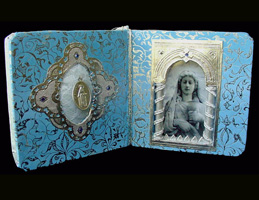 This Art Assemblage focuses on St. Dymphna. Legend says that Dymphna was born in the mid-seventh century to a pagan Irish king and a Christian mother who died giving birth to her. Fourteen years later, the father, who was still bereft over the loss of his beautiful wife, was advised to marry his equally beautiful daughter to ease his suffering.

Dymphna ran away with her religious advisors, but her father pursued them. When he finally caught up with them in Belgium, the king killed the priest who was protecting Dymphna. Then he chopped his daughter’s head off. The priest and Dymphna were buried But later, miraculous cures were attributed to their relics. Dymphna was venerated and became the patron saint of those suffering from nervous and mental afflictions.

Of course, I didn’t know all that when I created this reliquary. I just had this pretty silver medal with St. Dymphna inscribed on it. This art assemblage was built around the medal as well as the transparency of the statue.

The entire inside of this art assemblage is covered with blue paper with silver foiling. Decorative silver paper creates an arch around the maiden and silver columns wrapped with cord adorn either side.

The St. Dymphna medal is sewn to a pillow of sheer blue fabric covering a scrap of lace and surrounded by silver paper and four blue crystals.

The front of the reliquary is covered with silver embossed paper. A deep niche holds a ceramic angel and blue and silver threads embellished with beads and a silver cross hang over the spine.

Say a quiet prayer to St. Dymphna on those days when you’re feeling a little overwhelmed by life. Perhaps her young soul will protect you. 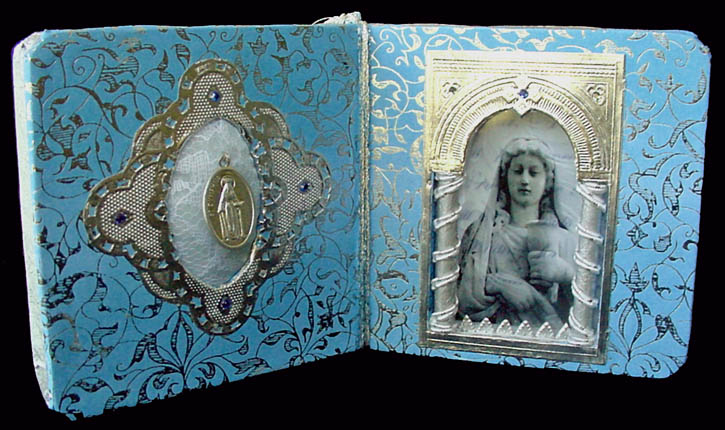 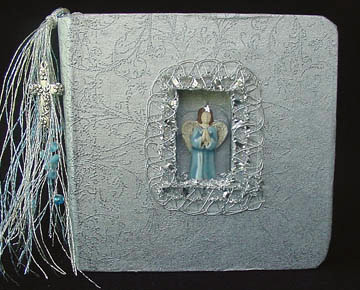 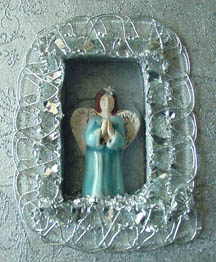 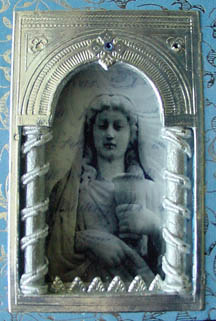 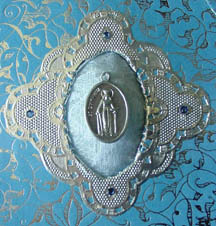 If you’d like to see more reliquaries, please take a visit to Religious Reliquaries ~ John’s Tooth and the Triptych – Marie’s Key.