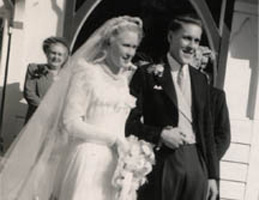 What is it about vintage photographs that capture our imagination? Going through boxes of old pictures in antique shops, I can’t help thinking, how did these pictures end up here? Where are these people’s relatives? Don’t they want these precious heirlooms?

Sometimes when I buy a photograph to use in a collage, I feel like I’m memorializing the person in some way. I run my fingers along the photo’s smooth surface and wonder: What became of this child? Did this women live a happy life? Why do they always look so darn serious? I realize that most of the people in the pictures are dead and buried, and it makes me feel sad. And then I wonder if my family photographs will end up in a shoe box in someone’s junk shop some day. One day, just about a year ago, I had the rare opportunity to actually find a family connected to some of those vintage images.

It was a cold rainy afternoon, but I didn’t care. I was in one of my favorite places – a little antique shop near my parents’ house in Sacramento, California.

In the past I had been able to glean some riches from this little hole-in-the-wall store. Today I was perusing a small selection of old books when I noticed an old photo album on the bottom shelf. It was covered in a doe-colored suede, with two bright red chili peppers painted on the front. I held my breath as I pulled back the cover, expecting it to be empty. You can imagine my excitement when I found that every one of the twenty or so pages contained several black and white photographs.

I took the album to the owner. My heart was racing. What was he going to ask for this priceless item? When he said “eight bucks,” I wanted to leap out of my skin, but instead, I calmly paid my money and walked out the door. . . then I leapt out of my skin.

I sat in my car in the parking lot and flipped through the pages. There were lots of family pictures: a boy on a tractor, a father and son gone fishing, four women laughing with their arms around each other, and much more. But the photos that caught my attention the most were the vintage wedding photos. There was even an article clipped from a local paper about the happy event which had taken place almost fifty-three years earlier in New Zealand!

My mind was racing with questions: Who were all these people? Were any of them still alive? How had their photo album, filled with irreplaceable pictures of their wedding, managed to travel from New Zealand to California? Surely there was someone from the family who would want to have these pictures back. 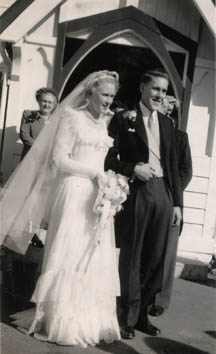 I began sleuthing around on the Internet. I searched genealogy pages online and found some last names which matched up with those in the wedding announcement. I sent out emails asking if anyone knew who these people were. I received three replies. One was from a gentleman who was very surprised to know that someone else with his same last name had once lived in his home town.

Through this process, I discovered the online white pages. I really didn’t think anything would come of it, but I went ahead and typed in the names of the married couple. Up popped the exact name of the groom. It showed that he was currently living in a town near where the the wedding had occurred. And there was his telephone number. I checked the time in N.Z. and made the call.

The man at the other end of the line said, “Why, yes it is.”

“My name is Karen, and I’m calling from near San Francisco, California in the United States. I have something that might belong to you.”

I proceeded to tell him about the photo album. Apparently, it had belonged to Shirley’s uncle and his wife who had left New Zealand and moved to Los Angeles shortly after the wedding. This couple had lived in Hollywood until they died. We decided that the album had probably been part of an estate sale and had somehow found its way to Sacramento.

I told Mr. Dewar that I would send him the album; he was absolutely delighted. I asked him if I could make copies of some of the photographs for my art, and he gave me his permission. 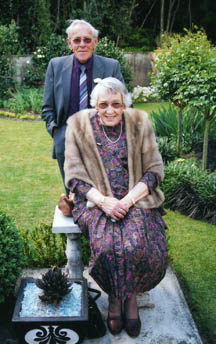 A few weeks after sending off the album, I received a package from New Zealand. It included a lovely letter of thanks from Mr. Dewar, some gifts, and several pictures of him and his wife at their daughter’s wedding. In his letter, Mr. Dewar said that he had never even seen some of the pictures before.

There was something very satisfying about reuniting this treasure with its family. Instead of remaining lost, these vintage photos finally found their way home.