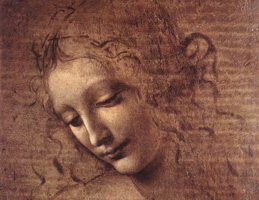 One year for Christmas I got the book How to Think Like Leonardo da Vinci, by Michael J. Gelb. After reading the chapter chronicling da Vinci’s life, I found that what impressed me the most were the number of projects that da Vinci left undone.

First of all, his journal entries outline plans for a bronze statue of the perfect horse– a statue which was never completed. He also did a series of sketches for a commissioned painting that was never realized. In addition, because da Vinci couldn’t bring himself to paint the face of Jesus Christ, he was never able to finish painting The Last Supper. Amazingly, of the seventeen paintings of da Vinci’s still in existence, a number of them are incomplete.

Yet despite all this fragmented work, Leonardo da Vinci is still considered to be a man of genius, typifying what we call the “Renaissance Man;” a person whose incredible imagination and creativity spanned a broad range of disciplines in areas such as engineering, architecture, art, and science, to name just a few.

As it turns out, I have a lot in common with Mr. da Vinci, and you probably do too. Consider the broad range of disciplines in areas such as child rearing, culinary arts, domestic engineering, personal management, and psychology (to name just a few) many of us are expected be proficient in. And who among us wouldn’t welcome the opportunity to be paid for simply sitting in the garden and discussing philosophy and art the way da Vinci did in the later years of his life.

I don’t know about you, but I find it reassuring to think that da Vinci left unfinished projects scattered across France and Italy. No one considers these works to be “failures.” And they certainly never stopped da Vinci in his quest to find truth and beauty in the world around him.

So when your inner critic berates you because you’ve started Project B before finishing Project A, or when you feel guilty for buying art supplies for both scrap booking and jewelry making, or when you’re torn between gluing down just one more image or unloading the dishwasher, remember Leonardo da Vinci. Look in the mirror, honor all your efforts to find truth and beauty in the world, and reward yourself with your own Mona Lisa smile.