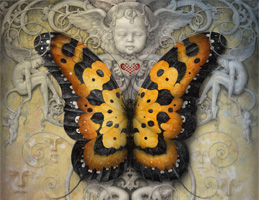 If you haven’t read about my first encounter with Daniel Merriam, you may want to read the article Meeting Daniel Merriam. It will put things into better perspective.

A few weeks ago I received an invitation to another artist’s reception for Daniel Merriam at the Louis Aronow Gallery in San Francisco. Mr. Merriam was going to be showing some new work, and I immediately told my husband that I wanted to go . . . but with my sister this time. It had been my sister, Kris, who had been with me when I first discovered Mr. Merriam’s art work at the small Avalon Gallery in Carmel. And it was Kris who had bought me Merriam’s book The Impetus of Dreams. I knew how much she wanted to see his original art as opposed to the giclees and prints we had seen in Carmel. My husband Michael gave the okay, but when I asked Kris if she wanted to go with me, she couldn’t. She had organized a team for the American Cancer Society’s Relay for Life in Sausalito that weekend. I was disappointed that she was going to miss her chance to meet Mr. Merriam again, but I totally understand her situation. So I asked Michael if he would go with me. After giving me some pseudo-sob-story about being my second choice, he agreed to go.

The week before the reception I kept mulling over the last time I had met Daniel Merriam, contemplating how I would do things differently. I thought about questions I wanted to ask him– about how he made his art, what kind of music, if any, he listened to as he was painting, why he had decided to start using acrylics in addition to watercolors, and a myriad of other wonders. I told myself that this time I was going to be calm, mature, and level-headed. I was not going to let my awe and admiration for the artist deter me from gathering information and picking his brain.

That Saturday I worked hard to not worry about what I was going to wear or how my hair looked. I rehearsed my questions in my head. My husband and I went out and had a great dinner at our favorite Greek restaurant, Kokkari’s, and then we headed over to the gallery.

Even though we arrived late, things were still abuzz in the little gallery. I spied Mr. Merriam immediately, as he talked to someone in the middle of the room. Michael and I started working the walls, looking at each art piece with amazement. I noticed that Mr. Merriam had used metallics in a few of his acrylic paintings which added a new dimension of richness to some of his work.

I said hello to Darryl, the gallery manager, and we marveled at Mr. Merriam’s art. I told him what I had said to my husband:

“One day, I’m going to own one of his original paintings. I’m not going to settle for a giclee or a print. I’m holding out for the real thing.”

“I know what you mean,” replied Darryl. “I’m hoping I’ll win the lottery one day myself. It’s really hard to see these incredible paintings come into the gallery and know that they’re going to be gone. In fact, I have two favorites in his new work, and I sold both of them tonight. People must sense the passion I feel for the artist and his work.” I knew that I could definitely feel his respect Mr. Merriam’s talent.

I thanked Darryl for continuing to send me art cards from the gallery, and he left me to talk to some other visitors.

I had been all around the room twice, and Michael was waiting outside, so I knew I had to say hello to Mr. Merriam. I waited nearby while two girls in their twenties sweetly gushed and fawned over him. They were so excited to meet him and talk to him and look at his art work. I couldn’t help smiling as I hovered nearby and listened to their conversation, waiting for my opportunity to approach him.

After the young women had said good-bye, I walked up to Mr. Merriam and shook his hand. “I don’t think you’ll remember me, but we talked briefly at your last reception,” I said. I started to feel my face warm up. “I love your new work,” I continued. “Your paintings are so amazing.”

“I have something I want to give you.” I handed him a copy of Heart-chitecture. “I try to do a little art work,” I said. “Nothing like yours, of course. But I wanted to give you this because your art work is what inspired me to create it.”

He turned the book over in his hand. “I’ve seen this book online,” he said.

I was in shock. Even though I put all this art and writing out there into the ether, and it never ceases to amaze me that someone is actually reading it.

Then it struck me. “I guess that means you read the article I wrote about you?” I asked, my face flushing several deeper shades of red.

“Oh my gosh. I am sooo embarrassed!” I wanted to run and hide. I tried to think of exactly what I had written in that article, but my mind was a blur. My brain suddenly turned to mush again. All my questions, all my good intentions of remaining calm, cool, and collected immediately flew out the window.

“I was very flattered,” he said. Damn! I thought. Didn’t I say something about being in love with the guy? What had I been thinking?? Be calm. Stay calm.

“You know that last time I met you, I was so nervous,” I said. “I was determined to stay calm this time.” What was I saying? Had I lost my mind? I was sounding like a complete idiot.

“Did people give you a hard time about what you had written?”

“Oh no,” I said. “In fact, I got lots of emails from people, particularly women, who had also met you or were familiar with your work and felt the same way I did about how charming and handsome you are, and about how much they love your art.” Okay, I was thinking, stop right now you rambling fool.

I had to get out of there. Had someone turned up the heat in the room? Where was the air conditioner? Could I find a way to get to the front door? I swear that my temperature was a hundred and two.

One thing you need to understand about this man is that when he’s talking to someone, and I’ve seen him do with this with other people, not just me, he is so focused on you, on every word you’re saying. He looks at you and seems to be listening so intently to every word. I’m just not used to someone paying such close, intense attention to what I have to say. I could hardly stand it.

“So anyhow,” I continued, “I just wanted to give you this book, and thank you for your beautiful art work.”

“I think,” he said, “that this is the most precious thing that anyone has done for me this year.”

“Really?” I couldn’t help but appreciate the hyperbole. What a warm and generous thing to say to a gushing, fawning, forty-plus-something woman whose tongue felt like a wad of bandages, whose face was definitely on fire, and who was in desperate need of fresh air.

“Where’s the family?” he asked.

“I think my husband’s around here somewhere,” I said. “I better go find him. Good-bye. I hope we’ll see each other again.”

“Are you going to write about this time, too?” he asked.

I hurried out the door, where my patient husband was busy negotiating with a young man who needed some spare change.

The next morning, at four a.m., I dragged my bones out of bed and went to support my sister as she did her Relay for Life in honor of her friend, Peggy. For an hour in the dark I walked around the track with Kris and her husband. My silly infatuation with Daniel Merriam and my admiration for his incredible art work may have momentarily turned me into an incoherent nutcase . . . again, but being there with my sister brought me back down to solid earth. She’s my real hero.