Art By the Book 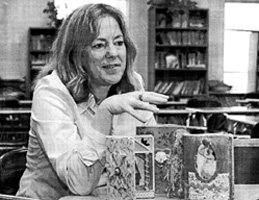 Art by the Book

In February, 2005, I entered three of my Reliquaries in the Arts Benicia Art of a Community show. A reporter for our local paper, The Benicia Herald, saw the show and liked my work, so she called me and requested an interview. Dana Enfinger wrote the following article, which I’m republishing here. I had never been interviewed about my work before, and I think she did a fine job making me sound much more eloquent that I actually felt.

The next morning, the article appeared on the front page. I was surprised that it was published so quickly. In fact, I didn’t even know it was there until someone at work told me. Before school that morning, people were congratulating me, and I was feeling pretty good and important. I was an artist! So it seemed rather appropriate that as I was walking to class with a definite spring in my step, a passing sea gull laid a big one my shoulder, bringing me right down to the humble earth again.

Karen Hatzigeorgiou is at the center of a budding art–creating altered books.

“Altered books aren’t like traditional art,” said the 40-something. “People like my work, but I don’t think they know what to make of it. It’s definitely not mainstream like scapbooking is, but more and more there are materials that are being sold specifically for altered book artists to use, like beads and doo-dads that would take you forever to find.”

Hatzigeorgiou has lived in Benicia for about 16 years and is married with two teen-age sons. She teaches seventh-grade English at Benicia Middle School.

Three of her altered books can be seen at “The Art of a Community” at the Arts Benicia Gallery through Feb. 27. A reception will be held there Saturday, Feb. 5 at 7:30 p.m.

She “alters” books, both children’s cardboard books and old standard books, by creating collages on the pages by using ribbons, acrylic inks, watercolors, pens, found objects like old jewelry (even an old fishing lure she found while at the beach with her sons), tissue paper and . . . insulation siding?

“The material does all these neat things when you iron it,” Hatzigeorgiou said.

In one altered book, the artist used the insulation material in “Sea Dreams” to look like seaweed. Hatzigeorgiou used a children’s cardboard book (in which the pages are also heavy board that she glued together to make stronger). She painted and glued impressions of the sea in watery blues and aquamarine on the pages replete with a sea goddess and included a T.S. Eliot poem on one of the pages.

“This is the first work that I ever sold,” said Hatzigeorgiou. “I made a second one for myself.”

She hadn’t intended to sell the book at all. She placed directions on how to make the altered book on the Internet and someone offered to buy it.

Hatzigeorgiou began creating altered books about three years ago after reading about the craft in a magazine.

“I love old books,” she said, “and this just captured me.”

Hatzigeorgiou joined a Yahoo! group of people interested in the art and found an altered book subculture growing.

She has sold a few books, but hasn’t put together a plan for selling them.

“I really don’t have a plan to sell the books,” Hatzigeorgiou said, “I just love creating them.”

She has created nine altered books that she calls Reliquaries. A reliquary is a shrine to house a relic. In the Middle Ages, it was common for churches to keep relics of saints, like a tooth or a bone, or perhaps a piece of cloth from a robe. Having a relic was a sign of a church’s status.

Hatzigeorgiou placed one of her son’s baby teeth in a tiny vial in one altered book to create a relic. 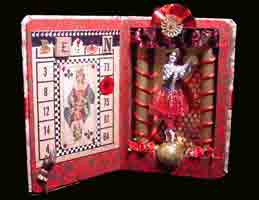 One of her books in the Arts Benicia show is called A Queen’s Games. It looks like a story right out of “Alice in Wonderland.”

“I created that whole concept from a playing card,” Hatzigeorgiou said. “That’s how I start a lot of my projects. I build it around something I like.”

Her work has to be seen in person to really appreciate it. You can look at her work at karenswhimsy.com.