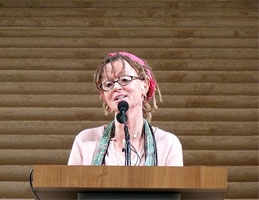 I’m in Berkeley, close to the campus, trying to find a place to park. It’s been raining steadily all evening, the roads are wet and shiny, and I’m having a hard time seeing street signs. I’m looking for the First Congregational Church of Berkeley, so I’m hoping I’ll see some religious looking building around. Anne Lamott is speaking there tonight, in my mind, a curious venue. By the time I’m done listening to her, I realize that appearing at a church makes perfect sense.

When I finally find the right building, I notice that people have left their umbrellas outside. They stand like little damp soldiers lined along the wall. I lean mine against the wall too, hoping I’ll recognize it later. I’m later than I’d hoped, and the pews are already packed, so I’m grateful that I came alone and am able to squeeze myself between some people near the front.

The inside of the church is lovely, with its tall ceiling and royal blue rosette-style stained glass window staring down. The woodwork glows a soft honey color. The seats are lightly padded; the backs straight and hard. There’s a mike on stage and a light shines down upon a podium. How long has it been since I’ve stepped inside a church?

A tall, white-haired woman approaches the microphone and introduces herself as a minister of the church, a church which will be celebrating its tenth anniversary soon. She proudly tells that audience that her church accepts everybody – gays, transgenders, transsexuals – anyone who wants to worship. The audience applauds with grateful appreciation.
A young poet introduces Anne Lamott, by reading us a short, moving passage from Bird by Bird, and then Ms. Lamott steps up to the microphone. She’s smallish looking, and seems a bit hidden behind an oversized sweater and comfortably faded blue jeans. A rose colored shawl is draped around her shoulders. Her blonde-brown hair is dreadlocked and pulled back from her delicate face with a piece of fabric. A few frazzled tendrils of hair have escaped and fall in front of her large, soulful eyes.

She tells us about her day, one most of us can relate to in one way or another. Root canal in the morning. Root canal! Her teenage son is home sick with the flu. Driving to the church, she got turned around and lost and had to ask some garbage men for directions. Her latest book, Plan B: Further Thoughts on Faith had been reviewed that morning by Terry Gross of “Fresh Air,” and she listened to it on a little FM radio provided by the dental assistant as she was getting the anesthetic for her root canal. She tells us that she has to wake up early the next morning to fly to Milwaukee. I immediately identify with her hectic schedule and appreciate her ability to gently laugh at herself and her circumstances.

She reads a long selection from her book, an essay about her son, Sam, and a hike they take along Mt. Tamalpias in Marin County, California. In the story, she’s able to intertwine her deep affection for her son, her awe and love for nature, and memories of her father, who would take the same walk with her when she was a child.

She recalls studying up before these walks with her father, so that she could hold her own in literary conversations with him. She always felt the need to impress him, to acquire his approval, which never seemed to be easily given, in apparent contradiction to Anne’s joyful appreciation of her own child’s spirit, full of restless energy and male exuberance.

When she’s done reading, she takes questions from the audience. She waits patiently for people to gather their thoughts. One woman, a bit shockingly for this liberal leaning crowd, asks if she has any black blood in her. Anne doesn’t quite hear the question at first, or maybe she does and can’t believe what she’s heard. But she says “No” and goes on to acknowledge that she does look “ethnic” with her large eyes, and frizzy hair, and lightly carmel skin. She uses the question as an opportunity to tell us about the church that she attended, made up of mostly Black people who wondered, too, “Is she one of us?” They took her in and saved her life. She’s been sober and drug-free for three years now, and so, all at once, the church setting seems perfectly appropriate.

She talks about all her insecurities as a writer. She says that when she started to “do better” she was always worried that she was just a fraud and that others would find out. She always felt like she “had to perform,” but at the same time was terrified of doing okay.

She believes that the American culture has a tendency to tell women to stay small and not take up too much or display any power. She felt that everyone was doing better than her, and she was jealous of their successes. The long, positive review by Terry Gross is affirming for her and gives her self-esteem a boost. Yet, she still feels shame over her ambition and her anger. All too soon, Anne Lamott reads a last brief passage and says, “Good night.”

As I pick up my umbrella by the door, I marvel at the recurring theme of insecurity among artists, even ones who have achieved the level of success that Anne Lamott has. Somehow, her vulnerabilities and normal-ness are reassuring. And I feel comforted knowing that artists are people, just like me.