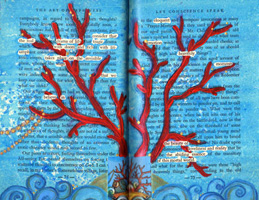 I found the book The Art of Happiness by John Cowper Powys (1935) at a barn sale near my father’s home in the summer of 2004. I think I paid $3 for it, which was pretty expensive by my usual standards. In my mind, I pictured a book of bright colors and themes that reflected the cheeriness of the title. I decided it would be a place for me to experiment and play with color. I had a file folder full of interesting color combinations that I had pulled out of magazines, so I decided to use a square punch and select one square of color for each page. I would build my artwork around the designs and colors from that square. That was my intention, and it became the process that I used, for the most part, although the poetry always came first. 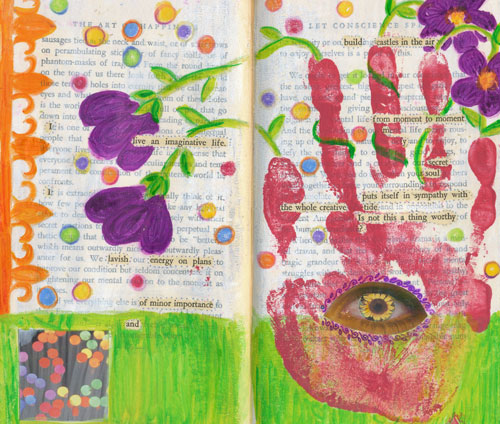 But this book became more to me than just a way to break free of my own color limitations. The text of the book itself lead me down a different path. That’s how it become more of an altered book journal than just an altered book.

In the four years that I intermittently worked on it, I found that the words I chose for the found poetry and the scrap of color I selected for my palette were totally intertwined with my mood and frame of mind on a particular day.

The author, John Powys’ own view of the world and how we achieve happiness did not create a very pretty picture at all. In fact, in the first two chapters, he tends to wallow in the despair that we sometimes feel when happiness appears to be eluding us. I was hoping that he was using contrast as a literary device and would eventually describe a way for us to lift ourselves out of discouragement. Eventually, I became skeptical about his ability to do that. I would say that the way I altered the book  actually provided a much more positive spin on the world than Mr. Powys did.

The Art of Happiness is sometimes a book of sadness, disillusionment, and discontent. Still, it’s important to note that it is also a book with an underlying current of optimism. Over the years it became much more of an altered book journal than I ever intended.

The Art of Happiness