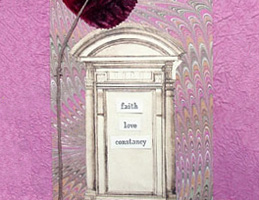 When I made this book, I was working on four altered art books at the same time. One of them, As the Earth Turns, I’d been working on for over a year. I certainly didn’t need to start another project. But I loved the image that ArtChixStudio had offered up for their online art contest, so I started thinking about how I could incorporate it into a book. I don’t know why the house imagery came to mind. I guess it was because I had been playing around with the idea of sawing books into shapes. I used a band saw to cut this board book into the shape of a house and then used transparencies for the little windows inside. I played with a pop-up too to create this little altered art book.

It’s strange how one idea leads to another and takes you places that you hadn’t really imagined. I guess that’s one of the reasons why I love doing art.

After thinking about my central image, I pondered a color scheme. Would you believe that up until I glued on the first sheet of paper, this book was supposed to be sepia and blue? I have no idea what made me turn to the pinks. I was really determined to use browns and blues and had the paper and embellishments all laid out and everything. Maybe it was the delicate beauty of the young girl that made the pink so appealing. 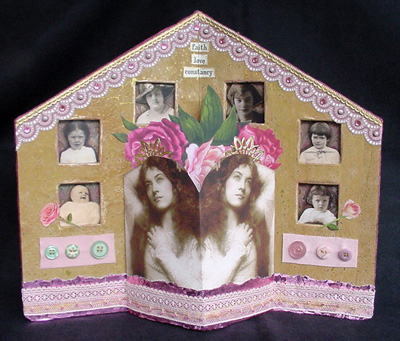 The first thing I did to prepare for this book was to create a template of the shape I wanted using an old file folder. I wanted the book to look like a house when it was standing, so I cut the closed folder at an angle and then opened it up to make sure it looked right. I used sticky notes to plan out the size and layout of the main images to make sure everything I wanted to include would fit correctly. Using a ball point pen, I marked a cutting line on the outside of the closed book. Then I used an electric jigsaw to cut through the entire book. That was a lot of fun; it cut just like butter.

I scanned and printed the vintage pictures, and resized them so they would fit in the windows. I printed two copies: one on an ink jet transparency and one on heavy paper. I didn’t want the faces to be so transparent that they were difficult to see, so I cut out the faces from the paper and glued them underneath each transparency. I also used a Q-tip dipped in water to remove the background ink around the faces from the transparencies. I think this gives the faces a shadowy halo effect. Although it’s hard to see in the pictures, I glued marbled paper on the bottom page under each window. I used double-stick tape to sandwich the transparencies between the middle two pages, so there’s a page width space under and over the images which gives the faces a slightly three dimensional look. 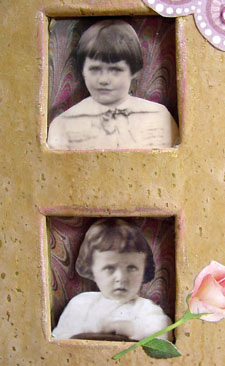 I used my template again to cut out a piece of cork paper to cover the spread of the book. This cork paper is so cool. It’s soft and textured with flecks of gold leaf pressed into it. I made X’s in all the window holes. I used gel medium to adhere the paper to the book, and folded the paper around to the back side to open the windows.

The main image was scanned and prepared in Photoshop and then printed on card stock. When I cut it out from the page, I made 1″ tabs on the sides which I folded under. I folded the image in half and used double stick tape to adhere the tabs to the page so that the image became a “pop-out.” I camouflaged the white tabs beneath with two small pieces of cork paper.

The rose image is from a vintage postcard. I scanned it, resized it, and printed it on card stock. Again I used double stick tape on the outside edges to attach it to the page. I didn’t want to put a crease in the rose, but I didn’t want it to lie flat on the page either, so it kind of lies across the spread and keeps the book from opening or closing. 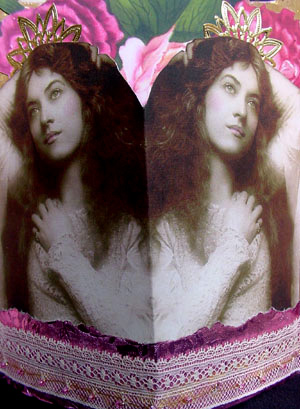 At the top of the page, I glued wallpaper and gold scalloped paper on top of that. I then added some cheap plastic rhinestones and pearls along the edges. 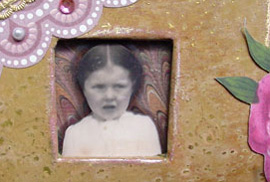 I cut the words “love,” “faith,” and “constancy” out of an old book and glued them at the top of the open pages. I used my oil pastels to draw around the words as well as the windows. 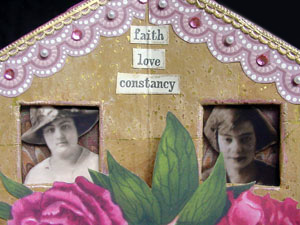 On the bottom of the page, I put pink foil paper. I sewed pink beads onto a piece of lace and used gel medium to glue the lace over the foil. Finally, I cut pink fabric and sewed some vintage buttons onto it with gold thread. I used tape to adhere the fabric/buttons to the book. 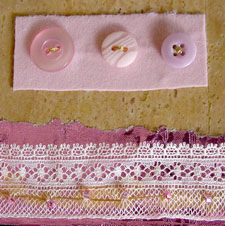 The outside of this book was done last. I used my template to cut a piece of handmade paper the same dimensions as the book, adding about one half inch around all the edges. I put matte gel medium all over the book cover and then placed the paper on it and smoothed it down and wrapped the edges to the inside of the book. The paper handled beautifully, like a soft cloth. I mitered the corners of the paper so the edges would wrap around cleanly.

At this point, I glued all the rest of the board book pages together. 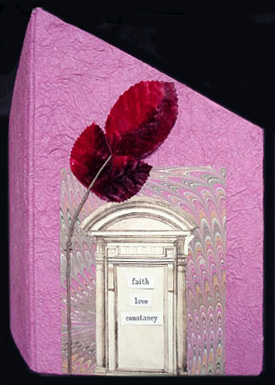 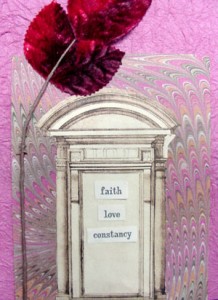 And the words. . . they are nothing like I originally intended. I was thinking of some quote or text dealing with obligations, of wanting to leave, but feeling the tug of commitments and responsibilities which often keep us close to home even when we’re dreaming of other places. I’m not sure if the faces around the girl are family members, friends, or a combination of both, I just know that they keep her from taking the paths that her wistful eyes imagine are out there waiting for her. But in the meantime, the qualities that make her stay, that keep her near to the people whom she cares about and who are depending on her, are the qualities of love, faith, and constancy. I’m sure that sometime soon, her day will come, and they will be ready to let her go. But maybe not.

If you liked this altered art book, you might also be interested in a little Altered Book Tutorial ~ The Astronomer’s Apothecary and Assemblage Art ~ A Queen’s Games